Werewolves are a variety of Shifters.

There are several varieties of creature that are all loosely categorized under the term "werewolf," mostly because they all display bestial qualities, and most physically transform into some version of a wolf-like shape. This is frequently tied to the phases of the moon and often triggered by the full moon, but the specifics vary.

Children of the Moon

Main article: The Children of the Moon

The Children of the Moon are a sub-species of werewolf capable of shifting into multiple forms--man, wolf, "wolfman," "dire wolf," and full "wolf-man"--based on will rather than the phase of the moon. They have long been at odds with the Volturi, a particular class of Vampire nobility. Unlike some other forms of werewolves, Children of the Moon may be born, as well as made. They have a marked capacity for psychic gifts, much like a certain sub-species of Vampire, and their regeneration allows them to live extremely long lives. They are actually no less common than other forms of werewolves, though their greater self-control often enables them remain more effectively hidden.

Actual, phyisically shifting lycanthropes vary in their nature based on their particular strain. The Pure-Bloods are marked by several criteria: They must be born or turned by the bite of an "alpha" werewolf of their strain, they retain at least a measure of their enhanced physical characteristics and senses in their human forms, they have increased capacity for awareness and self-control during transformation and can learn to transform by will instead of under a full moon (and can learn to resist that forced transformation), and they tend to most easily attain the "wolfman" shape, though they demonstrate the ability to learn other forms as well.

Skin-changers, such as the wolf-shifters of the Quileute tribe, are humans who possess the ability to change form, much like hexenwolves, into the "dire wolf" type of lupine shape. Technically, these can come in the form of other animals as well, though the wolf-shifter is one of the better known. The Quileute variety is one of the more prominent examples, characterized by a collective telepathic link, high body temperature, extreme speed and significant enhanced physical traits, psychological fixation ("imprinting") on a central figure in their lives, and functional agelessness so long as they routinely shift, as changing shape causes their bodies to regenerate. 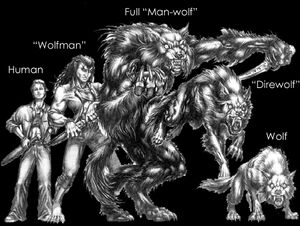 Werewolves possess various special abilities based on their current form. Notably, with training many strains of werewolf are able to perform partial-shifts, such as manifesting claws or fangs while in human form.

In human form, werewolves most commonly have some or all of the following abilities:

In wolf form, werewolves most commonly have some or all of the following abilities:

In man-wolf form, werewolves most commonly have some or all of the following abilities:

In "dire wolf" form, werewolves most commonly have some or all of the following abilities: 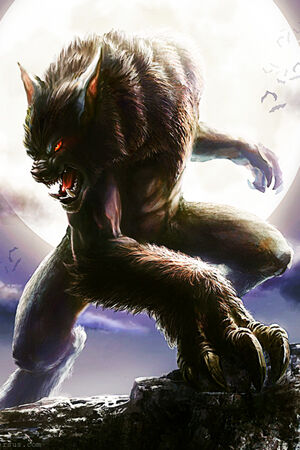 In full "man-wolf" form, werewolves most commonly have some or all of the following abilities:

Werewolves, like most creatures, can also have special gifts, whether fairly common or unique. Examples of common gifts are the ability to use druidic magic or sense and suppress the pain of another, while less common gifts might be, for instance, the ability to see with "spirit" or "alpha" vision to detect the aura of another. These gifts are at times common to a particular bloodline, but often as not they are defined by the individual. It can take special training and self-discovery to uncover such talents, however.

Sometimes, these gifts can be quite unique. An example from Teen Wolf

is helpful to illustrate this: Ethan and Aiden have the unique, shared ability that each can meld with the other into a single, larger being with much greater strength. As such, when in joined "wolfman" form, they operate at Supreme-level strength.

Werewolves are almost always creatures of profoundly strong passions, especially in their lupine shapes. As such, learning any measure of self-control, particularly while shifted, requires a great deal of mastery of self and the ability to channel those emotions into something they can control, often referred to as an "anchor."

Certain sub-species of werewolf require a diet heavy on raw meat to survive, and in some cases they even develop a taste for human flesh. This has led to werewolves being more heavily hunted, and it can also make a werewolf who allows him- or herself to become addicted to particularly bloody feasts more inclined to take foolish risks in order to satisfy their appetites.

Most werewolves are strongly linked to the phases of the moon, usually the full moon. The specific reaction varies from heightened aggression or exhilaration to forced transformation and berserker rage. Some werewolves, of course, may only be able to transform during the full moon, and others have learned to master their shifting under any lunar phase. Some werewolves may also be unable to shift or use their powers during a lunar eclipse.

Werewolves have been commonly shown to be vulnerable to Rowan charms, also known as mountain ash. It is an effective ward and weapon against most strains, whose powers depend upon magic. In addition, certain forms of moonstone can be utilized via ritual to temporarily suppress shifting, resulting in greatly increased bestial rage when the next shift occurs.

Wolfsbane is toxic to many forms of werewolves, so poisoning them with it or wounding them with weapons effectively laced with it may injure them seriously. As toxicity increases, their powers tend to be inhibited and they will grow increasingly ill and weak until a cure is administered.

Retrieved from "https://beforethedawn.fandom.com/wiki/Werewolves?oldid=8541"
Community content is available under CC-BY-SA unless otherwise noted.