The Space Needle is an observation tower in Seattle, Washington, a landmark of the Pacific Northwest and an icon of Seattle. It was built in the Seattle Center for the 1962 World's Fair, which drew over 2.3 million visitors. Nearly 20,000 people a day used its elevators during the event.

The Space Needle has an observation deck at 520 ft (160 m) and the rotating SkyCity restaurant at 500 ft (150 m). The downtown Seattle skyline, as well as the Olympic and Cascade Mountains, Mount Rainier, Mount Baker, Elliott Bay and surrounding islands can be viewed from the top of the Needle. Photographs of the Seattle skyline often show the Space Needle prominently, above skyscrapers and Mount Rainier.

Visitors can reach the top of the Space Needle by elevators that travel at 10 mph (16 km/h). The trip takes 41 seconds. On windy days, the elevators slow to 5 mph (8.0 km/h). On April 19, 1999, the city's Landmarks Preservation Board designated it a historic landmark.

In September 2017, the restaurant was temporarily closed as part of a US$100 million renovation. The renovation included the installation of a new rotation motor and see-through glass floors in the restaurant, as well as the replacement of the observation deck's wire enclosure with glass panels.

In August 2018, it unveiled its latest addition: the world's first and only revolving glass floor, known as "The Loupe." Standing 500 feet -- or 50 stories -- above street level, the observation deck's new see-through floor offers 360-degree views of the large city. The floor is powered by 12 motors and is constructed of 10 layers of tightly bonded glass to ensure safety.

A marvel of glass and steel construction, the interior of the Space Needle captures a sense of modernity that verges on the futuristic. Elevators run up and down from the ground floor lobby to the famous "flying saucer" upper level, which offers observation decks and panoramic views of the surrounding city and Puget Sound. The saucer also features the famous revolving restaurant, SkyCity, which was formerly known as the Eye of the Needle. SkyCity is a fine dining restaurant with a casual dress code, serving Pacific Northwest cuisine and new American cuisine, providing a fairly expansive menu that includes a variety of vegetarian and vegan menu options alongside more conventional fare. The restaurant is lavishly decorated, with comfortable booths and tables arranged to take maximum advantage of the spectacular, rotating view. 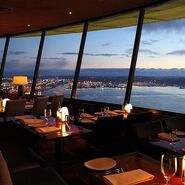 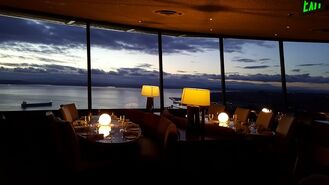 Add a photo to this gallery

Retrieved from "https://beforethedawn.fandom.com/wiki/Space_Needle?oldid=8601"
Community content is available under CC-BY-SA unless otherwise noted.