Rowanwoood is a bed and breakfast, though it also serves as an unofficial home for any and all witches who need a safe haven. It currently serves as the unofficial headquarters of the Grand Coven. Under the purview of the coven's Witches' Council, Rowanwood also serves at need as a magic school under Rowanessa's direct tutelage. Notably, its grounds include the woodlands where The Neveroak is located. Rowanwood contains a variety of enchanted objects that its owner, Nessa, has collected over the centuries, as well as her expansive occult library.

Rowanwood house is a fully defended freehold, and some of the magic of The Vale has seeped over into the house and its grounds: The house is somewhat self-aware, and it will act primarily to preserve the safety of Nessa and anyone she has granted sanctuary there. It has Supreme level wards and defenses against magical attacks, and it can perform acts of spontaneous sorcery at the Basic level in order to make guests there more comfortable (such as a bath filling automatically, a bed making itself, or a cup of tea appearing just at the moment it's most needed).

As Nessa is a member of the Witches Council of the Grand Coven, the house also effectively serves as a holdfast for the coven.

Rowanwood is located within a realm known as The Vale, which exists within the Otherworld and is only otherwise accessible through the Ways or via its front gates, which can be linked to other realms and are usually kept connected to one or more points on Earth. The Vale encompasses Nessa's home, Rowanwood, where her power is centered. The realm reflects her desires, and it allows her to fuel the magics of Rowanwood house and to affect the conditions around it, such as the weather of the house grounds.

The Vale is warded against violence. Unless the defenses have been breached by an invading force, no real violence is possible there. The worst damage one could inflict against another is the equivalent of a slap in the face. It might sting a bit, but no blood would be drawn, nor even a single bruise be left behind. However, attempted aggression or harassment of others, there, might lead to the aggressor being moved to a far part of the area, well away from their intended target, and if such things persisted, the hostile party might even be removed from the Vale entirely. Any attempt at a serious altercation in the area requires one to contact staff before proceeding. 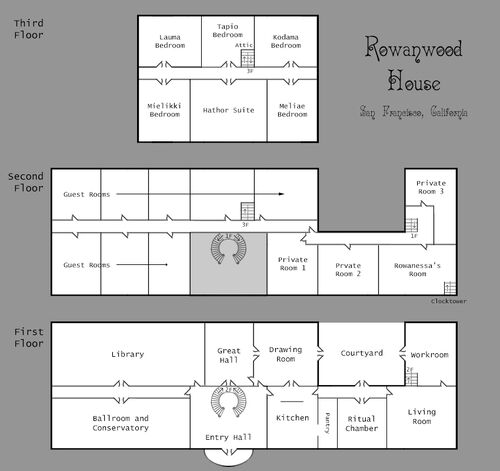 Retrieved from "https://beforethedawn.fandom.com/wiki/Rowanwood?oldid=8273"
Community content is available under CC-BY-SA unless otherwise noted.