The original Beacon Hills railway station was active during the Twentieth Century, but by the millennium the rail lines had become less active and Beacon Hills a less important railway stop, resulting in a decrease in the city's industrial activity. The railway station one of many buildings to be abandoned in the city since then. After coming to Beacon Hills, fairy knight-errant Rey Devoss sought to establish a personal Holdfast thee, choosing the railway station to house it. Rey frequently offering hospitality or refuge to those in need, and the station has come to serve in much the same stead as the castle of a knight of old.

Outside, the building is a squarish edifice of white stone, all classic columns, arched windows, and ornate touches. Beyond the grand entrance porch and double doors, it opens into an expansive central hall with a vaulted, arched ceiling supported by walls of similarly arched windows, each made up of many small rectangular panes. Everything is made up of stonework, the floors polished to a gleaming shine. Various kiosks along the edges of the room, formerly ticket booths and small shops, have been converted into various personal home conveniences, while doors all along the outside open onto the now-closed train platforms, outside. Stairwells at the corners of the room lead both upstairs and down into the underground, while the center of the chamber is dominated by a large, lit standing clock that faces in all four cardinal directions. 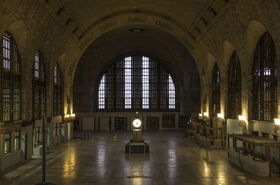 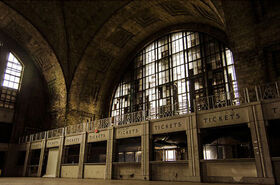 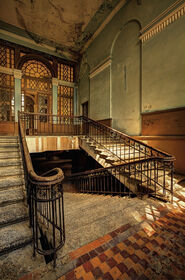 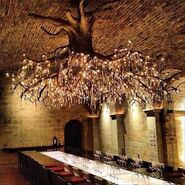 Dining Area
Add a photo to this gallery

Retrieved from "https://beforethedawn.fandom.com/wiki/Old_Railway_Station?oldid=7957"
Community content is available under CC-BY-SA unless otherwise noted.