The Host of Caritas

Krevlornswath of the Deathwok Clan, known to his friends as Lorne, is the owner and host at a popular demonic karaoke bar called Caritas. A transplant from a demonic realm called Pylea, he is known for his human-loving pacifism, stunning fashion sense, and tremendous singing voice. Occasionally, he has been known to work with Angel Investigations.

Lorne is generally a peace-loving, tolerant person who strives to see the potential for good in all beings. Preferring guidance to violence and patience to judgment, he is a compassionate person who loves life, music, and pleasure. He values comfort and companionship, though great wealth and other material concerns are secondary for him at best. He might seem like quite a simple soul in many ways, content to simply help others, enjoy a drink, and find love and enjoyment where he can. In truth, this does largely describe him. However, Lorne does have a darker side. When those he loves are threatened, Lorne's loving nature can turn fiercely protective. This is the only time he will generally violate his pacifistic nature, even killing for those he loves, though in the long term he will suffer the consequences of having done so. There's a touch of the mama bear in Lorne, and mama will suffer for those she loves if she has to.

Such is the power of Lorne's voice and the clarity of his music, that he can actually affect the balance between discord and harmony. As Lorne is by his nature a harmonious person, his ability is to shift the balance back into harmony, away from discord. In practical terms, what this means is that when Lorne is present for a situation where the balance between harmony and discord has been metaphysically disrupted, it's possible for him to use his voice to shift the balance back into harmony. This does not work to undo normal or even most supernatural types of danger or threat, only when the cosmic balance between harmony and discord has been itself upset. When this occurs, Lorne is able to shift the balance back toward harmony within the range of his voice, for as long as he remains singing. In some cases, a short song might be enough to restore the balance, but if the unbalancing effect is ongoing, the imbalance will return as soon as Lorne's song ends. Naturally, even Lorne's impressive voice has its practical, physical limits. It is possible that this effect could be utilized in the correct situation or with the proper ritual to have a larger, more lasting impact, but that would require plot approval.

Lorne is a competent businessman, having successfully run his own karaoke bar for a number of years.

Lorne is by preference a lover, not a fighter, but he's still a member of the Deathwok clan from Pylea, and he's not been able to make it this far in life without picking up the basics. He can manage all right in a fight if he needs to, but years of running a karaoke bar and living a life of non-violence have blunted his combat ability.

Lorne is an expert at "reading" others, even without the use of his powers, and has very keen insights into the natures and motivations of other beings, whether they be human or other sorts.

Lorne is very well-versed in his understanding of music, as well as being an exceptionally skilled singer. Even without his supernatural vocal range, he would still be one of the finest singers in the world. He can also play the piano fairly well, and he has an unfailing ear for music.

Not just a talented singer, Lorne knows how to work a crowd with shrewd expertise. He's also a talented actor and orator, generally quite skilled in performing or presenting himself in whatever way an occasion might demand.

Lorne has a flawless sense of style and fashion, if admittedly a sometimes quirky one. He can throw together a killer ensemble on a budget or decorate for a party with equal aplomb, and he's exceptionally good at hosting a swanky event.

When Lorne hears someone produce vocal music of any kind--including singing, humming, and whistling--he is able to read their emotions, surface thoughts, and even gain glimpses of their future. This may be generally regarded as a "plot device power," and it is heavily governed by consent, but generally Lorne is quite a highly perceptive mentalist when it comes to reading people in these situations. When someone's emotions or aura are exceptionally strong, he may even be able to get a partial reading without the need for them to sing. His powers are not flawless, however, and they can be fooled by certain forms of magic and substances such as calendula. Notably, his powers have the potential to function at far stronger levels. For instance, when excessively sleep-deprived, he has demonstrated powerful suggestive mental influence, able to compel others without even intending to. While Lorne's powers are quirky and very specifically developed, they do hint at a powerful mind and quite a strong will.

As a Pylean Deathwok demon, Lorne has extremely hardy physiology. He can be completely dismembered without taking ill effect, and he has shown the ability to regenerate extremities, such as his horns, within a matter of days. As a result of this, he is very, very difficult to kill, presumably able to regenerate from nearly any damage, if given enough time. His vital points are significantly different from those of a human. Notably, this combination also seems to render him immune to many toxins, such as having a complete immunity to the effects of alcohol. Apart from his hardiness and healing properties, he also has exceptionally keen hearing, able to hear frequencies far beyond those of the human ear.

Lorne's voice is not only a finely tuned instrument, but it can achieve a wide variety of different effects, which include being used as a very powerful weapon. He can easily shatter glass, and he has shown the ability to even destroy physically formidable demons with the power of his voice alone. The true potential of this power is uncertain, however, due to Lorne's tendency to shun violence and embrace pacifism wherever possible. 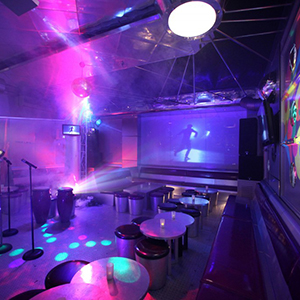 Lorne owns a demonic karaoke bar named Caritas, currently located in San Francisco. The bar is heavily warded against supernatural violence of any sort, making anything from hostile magic to demonic bar fights literally impossible inside it. This magic also helps to hide it from prying mundane eyes. Apart from being a kind of sanctuary, it's also a highly lucrative business that caters to the non-human population. However, humans are also quite welcome.

Born in Pylea to the Deathwok clan, Lorne never fit in. Where his brothers wanted to fight and spill blood, Lorne was wooing lovers. After being accidentally transported to Earth, he fell completely in love with music, and while he'll never truly fit in with human society, he's found that he absolutely loves it here. A perpetual outsider, Lorne may never fully fit in, so in many ways he's given up trying. This limits what he can do in the world, but he finds ways to make it work.

Despite his origins, Lorne abhors violence. His nature is one of peace and love, so much so that acts of violence may make him physically ill. This means that where his powers might otherwise make him a very capable warrior, he's eschewed that path in favor of peaceful pursuits. While Lorne does not see this as a weakness, it nonetheless leaves him far less able to defend himself than he might otherwise be.

Oracular ability has its perks, but it can also be quite a burden. Particularly potent or distressing visions can have a physical impact on Lorne, even harming him, and even lesser effects can leave him feeling quite ill if the vision is exceptionally negative.

Born to the Deathwok clan in the otherworldly realm of Pylea, Lorne was never a good fit for his family. They were warriors, while he hated violence. As such, he was often bullied and outcast in his home, and growing up was difficult. There were those who valued his odd ways, though, for he had a number of lovers in his youth. Then, in 1996, Lorne wandered into a magical portal and found himself in Los Angeles. Falling in love with human music and culture, he forged a life for himself and learned to use his natural powers in new and creative ways. By 2015, he had a well-established presence in LA, running a demonic karaoke bar called Caritas. The "Dislocation" event transported Lorne and his bar to San Francisco, and he has lived there ever since, now running his bar out of the Haight-Ashbury neighborhood.

Retrieved from "https://beforethedawn.fandom.com/wiki/Lorne?oldid=8060"
Community content is available under CC-BY-SA unless otherwise noted.